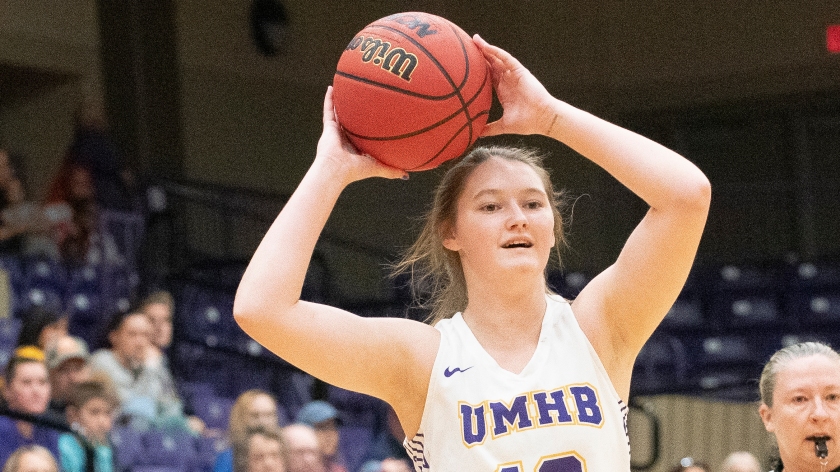 TEMPLE, Texas- In its first, and likely only neutral site game of the regular season, the UMHB women’s basketball team earned its second win over Concordia (TX) in the last three days, defeating the Tornadoes 53-44 on Saturday afternoon at Temple College.

The game, originally set to be played on Concordia’s campus in Austin, was moved due to electrical issues at the Tornadoes’ facility.

After defeating Concordia 74-42 on Thursday night in Belton, head coach Mark Morefield’s squad was familiar with the opponent, and quickly got to work.

Graduate student Taylor Kollmorgen followed up a 13-point effort on Thursday with her second double-double of her UMHB career, scoring 10 points and pulling down a remarkable 18 rebounds. The graduate transfer also reached a season-high in minutes played, as she saw the court for 26 minutes.

Feeding off Kollmorgen’s stellar play on both ends of the floor, the Cru played with confidence and stuck to the gameplan, though Concordia led 10-7 at the end of a low-scoring first-quarter. The second quarter was about as different as it could have been when compared to the first, as UMHB erupted by scoring 20 points. Holding a 27-19 lead at the half, the Cru kept its foot on the pedal, going on a 9-2 run to open the second half, widening the gap to as many as 15 points before the Tornadoes, who served as the home team, cut the deficit to eight early in the fourth quarter. That was as close as Concordia would get, as UMHB earned its 10th victory of the season, finishing the game by holding the Tornadoes to just five points for the final 3:28.

Post play was critical in the victory, as Morefield has stated multiple times that he feels this is the best rebounding team he has had in recent years. In addition to Kollmorgen’s performance, forward Hannah Eggleston led UMHB with 12 points and added nine rebounds. The guard duo of Olivia Champion and Bethany McLeod paced the backcourt, as each shot two-of-five from the field. McLeod also had an impressive four steals.

With the win, UMHB moves to 10-7 on the season and is now at .500 in conference play with a 6-6 record. The Cru is locked in to make the ASC Tournament, which features the top four teams from each division, and currently sits fourth in the West Division. The team will have a prime opportunity with Sul Ross State, No. 2 in the division, and Howard Payne, No. 3 in the division, coming to Belton next week.

Thursday’s contest against Sul Ross will tip off a 5:30 p.m. CT and Saturday’s duel with Howard Payne will be played on Saturday at 1 p.m. CT.

In other ASC women’s basketball news, Hardin-Simmons clinched the West Division title on Saturday and East Texas Baptist locked in the top spot in the East Division. The Cru lost to both teams earlier this season.