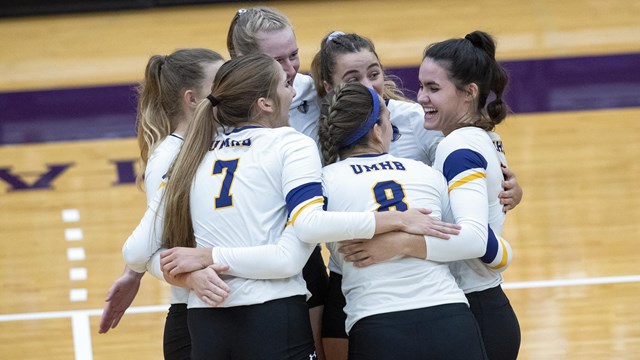 AUSTIN, Texas- Though no fans sat in the stands in the Concordia Fieldhouse, the intensity on the court brought out the best in both teams, as the UMHB volleyball team split a doubleheader with the Tornadoes of Concordia on Tuesday night.

UMHB earned a 4-1 victory in the opening match, before picking up its first loss of the season in a three-set sweep in match two.

Entering the contest, Pryor knew Concordia posed the biggest challenge for his team thus far, stating last week, “Concordia is coming up, and they’re good. They’re going to give us some trouble. We’re going to have to be ready to go.”

His prediction was spot on, as the Tornadoes earned a 25-20 first set victory in the first match of the evening, highlighted by a 5-0 scoring run to take a decisive 23-18 lead. With three new players on the floor to begin the second set, the Cru turned the tables, this time edging out Concordia by the same score, 25-20. The Cru established a defensive presence thwarting multiple scoring runs from the Tornadoes.

UMHB also won sets three and four by scores of 25-21, and 25-18, respectively. The Cru found its offensive rhythm in the final set, posting a hitting percentage of .357; a significant improvement from the .152 third-set hitting percentage.

In the second match, the Cru was unable to rebound from a first set loss, as Concordia had an answer for everything UMHB did offensively. The Crusaders fell 25-17 in the opening set, and dropped the second by the same score. After taking an early 2-0 lead in the third set, Concordia got in front 6-5, before the Cru knotted the score at 15 apiece. The Tornadoes then took control, widening the margin to 24-17. With Concordia at match-point, the Cru managed to pick up two points on attack errors, before a kill from Kylexus Block gave the Tornadoes the 25-19 win.

“The second match we just didn’t have it,” remarked Pryor. “We weren’t really efficient in any aspect of the game.”

Novak again led UMHB in kills with 11, and only three other Crusaders registered two kills or more. Freshman setter/outside hitter Hannah Frasca had an impressive 20 digs. As a team, UMHB hit .108 compared to Concordia’s .265.

The Cru has a short turnaround, as Sul Ross State heads to Belton for a doubleheader on Friday. Match one begins at 3 p.m. CT and match two is set for 5 p.m. CT.

“It’s one match,” said Pryor following the loss. “This middle stretch of the conference is where we will really see what we need to improve on. After tonight, there are definitely things we can improve on.

“We had a bad day. It is our job to make sure this doesn’t turn into a bad week. We will get back after it and do our best to fix it. I’m excited to get back into the gym and figure it out.”

UMHB is now 7-1 on the season, and remains in sole possession of first place in the ASC West Division.