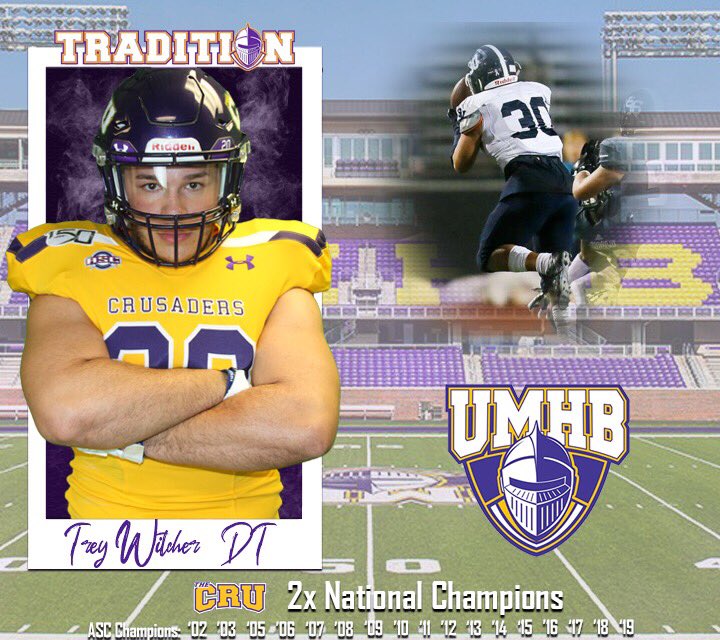 Above photo: Trey Witcher was previously offered by UMHB in late 2019.

BELTON, Texas- For the third time this week, the UMHB football team added a skilled transfer, as Black Hills State University’s Trey Wichter announced his commitment to the Cru on Friday morning.

The defensive end began his career at NCAA Div. II Black Hills State, playing in both of the Yellow Jackets’ games during the abbreviated 2020 season as a freshman. In his collegiate debut at South Dakota Mines, the 5’11, 235 lb standout tallied one solo tackle. He followed that up with three tackles the following week against Colorado Mesa, as well as one quarterback hurry.

13 weeks ago, Witcher made public his decision to enter his name into the transfer portal, thanking his teammates and coaches at BHSU.

Originally from San Antonio, Texas, Witcher played his high school football at Smithson Valley High, and was named First Team All-San Antonio and First Team All-District as a senior in 2019. He etched his name into the Smithson Valley record books during a four-year prep career, ranking seventh in career tackles for loss (34) and sixth in career sacks (17.5). His high-level of play was recognized across the state, and Witcher was ranked as the No. 30 defensive tackle in the state of Texas in 2019 by Dave Campbell’s Texas Football.

During high school, he also played with Team USA on a U17 team.

He comes to UMHB with four years of eligibility remaining and may compete with Josh Patteson and Kobe Giles, both second-year freshmen for one of the two starting defensive tackle jobs. Sante Parker Jr. appears to be a lock at the other defensive tackle position. However, he was listed as a defensive end on BHSU’s roster, and could see time there as well for the Cru.

This article may be updated as more information becomes available